For My Best Friend

the clouds forming a ceiling that caps a feeling of grey.
greyness at the birth of the day...the sun wanting to play,
wanting so much to play, like a child at a locked gate.
waiting for the moment when the pin is slipped.

I saw a snail crossing the sidewalk in the aftermath
of a midnight rain. unaware that the path she took
was to death, for she did not know the concept of concrete
or car or crushing. just that for the moment, the trail
was wet enough for her to get the traction she needed.

and the loud man howled at the empty vendor stalls,
wrapped in his sleeping bag patched with a past
no one would never ask about and he probably doesn't recall.
I wonder if his mother knew when she kissed him to sleep
at night
a thousand lives ago
that he would wander the wasted echoes of a city,
shouting strange slogans that he alone knew the qaballah of.
mother's love forgotten.
his hair matted with sweat and dirt and Lord knows what else.

a surfer jogged at the edge of the waters, his neoprene cocoon
fitting him well as his bare feet left a path in the wet sand.
he carried his board beneath his left arm
and his short brown hair told me that in his secret identity
he probably had the office down the hall
and this was his escape from the mediocrity
that Thoreau warned us about.
before there was a benefit concert by millionare
rock stars to save his pond,
when any one of them
could have done it all by themselves.

and a strange pigeon flew through the hovering shore birds,
his wings slapping together as he applauded his courage
in crossing turf of a gang of birds not of a feather.
his mottled greys his colours, shown in defiance.
and the gulls barked at him in colourful curses
I did not understand (for my seabird is worse than my Spanish.)

and of the three winos on the canal, the cleanest one said good morning.
maybe he's new to the life, or maybe he has kept one foot
a meter over the line that demarcates that world of degradation
from this world of degradation.
maybe his anesthesic of choice even works better than mine.

and the vendor dragged a folding chair around,
fastening up the canvas flaps to get ready to display
his wares to a world of tourists there to see a world
they would never dare live in.

because it is just too weird. too strange. too dark.
too bright. too pierced. too tattooed
and too much like home to me, now.

In order to make ends meet I have picked up a second part time job. I am working for a new start-up providing content for the social media accounts. Basically that means pinning http://pinterest.com/Bilbary/ and tweeting https://twitter.com/bilbary# and doing an occasional Facebook post https://www.facebook.com/bilbary. I have to say, I am really excited about this one because bilbary.com has made a commitment to support libraries. In fact, they are entering into a partnership with the Kansas State Library and part of the proceeds for each book purchased or rented will benefit libraries. The website is still in the beta phase but here are some of the things that will be coming soon: http://holding.bilbary.com/

If you care about libraries and you like the e-book format, you might want to consider purchasing your ebooks through bilbary.com.
Posted by A Librarian at 9:29 AM No comments:

It has been quite a while since I have posted so I thought I would catch you all up on the kitten front. Since my last posting I have had Skippyjon Jones' brother come to stay for a while after his first adoption didn't "take". He went off to another foster home after visiting me. His new foster mom became a foster failure and is now the new owner of a cat named Peanut. What can I say, this foster gig is dangerous.

Right now I have two adorable new visitors. Their mom was killed by a car and the litter had to be bottle fed. I got them the day after they transitioned to food (while their heads were still bigger than their bodies). Yesterday they were snipped and clipped so they are now up on the tarasdream.org website and ready to be adopted. Take a peek. If you are interested, fill out an application. These two won't last long.

They are part of the Hunger Games litter so may I now present Primrose and Finnick for your viewing pleasure.


Primrose who is famous for her glamor shots. 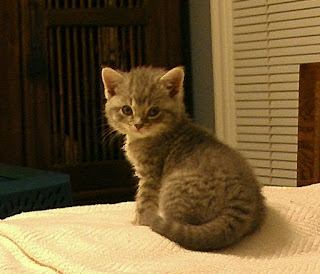 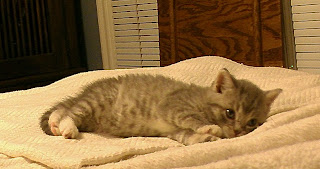 Finnick's pictures are not as beautiful because he cannot sit still. Almost every picture I have of him is a little blurry. In this one he is watching me eat. I am not sharing which is clearly making him sad. 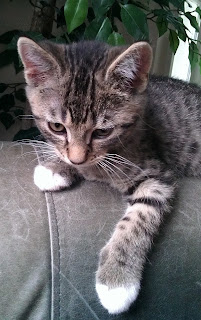 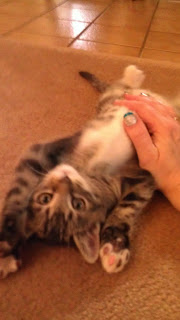 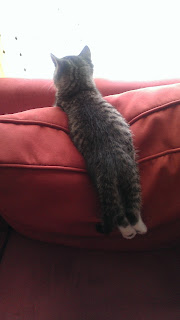 So today I did this

Here is the info that they sent: 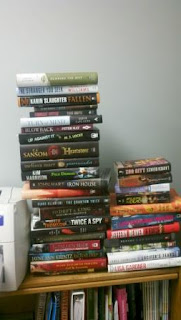 I have officially accepted my appointment for the ALA RUSA Reading List book award committee and will be heading into year seven of continuous reading award committees. My understanding is that this indicates I may indeed have a book award addiction. People think I am addicted to getting books from the publisher but that isn't it. In fact, I love it when I can get ebook versions instead. What I am addicted to is the challenge of reading hundreds and hundreds of books every year and being force to expand my reading of new authors and types of books.

A friend pointed out I had not yet posted this years winners anywhere except Twitter so here they are. The 2011 Best Genre fiction of the year.

Established in 2007 by the CODES section of RUSA, The Reading List seeks to highlight outstanding genre fiction that merit special attention by general adult readers and the librarians who work with them.

*Before I Go To Sleep by S. J. Watson, Harper Collins, (9780062060556)
Each morning, Christine wakes with no memory. From the clues she left herself, she tries to piece together her identity and sort lies from the truth. The unrelenting pace thrusts the reader into the
confusion of a waking nightmare in which revelations of her past lead to a frantic crescendo.

The Night Circus by Erin Morgenstern, Doubleday, (9780385534635)
Le Cirque des Rêves is utterly unique, disappearing at dawn in one town only to mysteriously reappear in another. At the heart of the circus are two young magicians, involved in a competition neither completely understands. The dreamlike atmosphere and vivid imagery make this fantasy unforgettable.

*Doc: A Novel by Mary Doria Russell, Random House, (9781400068043)
In the early days of Dodge City, a genteel, tubercular Southern dentist forges a friendship with the infamous Earp brothers. Combining historical details and lyrical language, this gritty psychological portrait of gunslinger Doc Holliday reveals how the man became the legend.

*The Ridge by Michael Koryta, Little, Brown, (9780316053662)
The unexplained death of an eccentric lighthouse keeper in the isolated Kentucky woods, followed by a mysterious threat to a nearby large cat sanctuary prompt an investigation by a journalist and the local sheriff. Palpable evil and a sense of dread drive this chilling tale.

The Devotion of Suspect X by Keigo Higashino, Minotaur, (9780312375065)
An introverted mathematician matches wits with a brilliant former colleague to protect the neighbor he secretly adores from a murder charge. Although the reader knows the murderer’s identity from the beginning, this unconventional Japanese mystery remains a taut psychological puzzle.

Silk is for Seduction by Loretta Chase, Avon, (9780061632686)
Ambitious dressmaker Marcelline Noirot will do almost anything to secure the patronage of the Duke of Clevendon’s intended bride. Neither her calculated business plan nor his campaign of seduction can withstand the force of their mutual attraction. Witty banter and strong-willed characters make this a memorable tale.

*Leviathan Wakes by James S.A. Corey, Orbit, (9780316129084)
The missions of a jaded cop and a dedicated ice hauler officer collide as the fate of humanity hangs in the balance. A mystery adds a noir touch to this space opera featuring deeply flawed yet heroic characters, non-stop action, and Earth versus Mars politics.

Up Against It by M. J. Locke
Pandora’s Star by Peter Hamilton
The Quiet War by Paul J. McAuley

*The Language of Flowers by Vanessa Diffenbaugh Ballantine, (9780345525543)
A former foster child struggles to overcome a past filled with abuse, neglect and anger. Communicating through the Victorian language of flowers allows her to discover hope, redemption and a capacity for love. Damaged, authentic characters create an emotional tension in this profoundly moving story.

* My personal favorites from the list.
Posted by A Librarian at 6:22 PM No comments:

As you may have noticed, it has been a while since I have posted. Let's find out what I have been up to during the past few months....


And of course, READING until 2 or later every night to be ready for the American Library Association Reading List committee meeting. Ten more days until the big meeting when we decide the best books of the year.
Posted by A Librarian at 1:43 PM 1 comment:

A Librarian
I am a single librarian with three cats and a steady rotation of foster kittens ...who sometimes even gets a chance to travel. I sound like the stereotype, don't I? :)

Blogs that Fascinate Me

Goodreads Books or, what I am reading