If you read romance, you might find a book on this list you will enjoy.... http://www.kclibrary.org/blog/kc-unbound/thirteen-best-romance-novels-2010
Posted by A Librarian at 2:54 PM No comments: 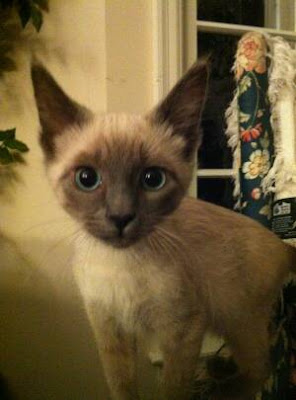 It is entirely possible one of my current foster kittens might become a permanent member of my household. I am currently calling him SkippyJonJones after a children's book character. Tell me, could you resist this face?
Published with Blogger-droid v1.6.5
Posted by A Librarian at 9:55 AM 1 comment:

Established in 2007 by the CODES section of RUSA, The Reading List seeks to highlight outstanding genre fiction that merit special attention by general adult readers and the librarians who work with them.
The Council, which consists of twelve librarians who are experts in readers’ advisory and collection development, selects one book from each of eight different categories. The eight genres currently included in the council’s considerations are adrenaline titles (suspense, thrillers, and action adventure), fantasy, historical fiction, horror, mystery, romance, science fiction, and women’s fiction. However, the Council is constructed in such a way to be adaptable to new genres and changes in contemporary reading interest.
The Council announces the eight winning titles at the CODES Awards Reception. A short list of honor titles (up to four per genre) is also announced. All selected titles are published on the RUSA Web site following the event.
Members interested in serving on The Reading List Council should read about serving on the Council.
Authors or publishers interested in having their book considered for The Reading List should review the selection criteria and the submission guidelines.

by Olen Steinhauer, Minotaur Books (9780312622879)
Burned-out spy Milo Weaver confronts layers of deceit as his career collides with his desire to reclaim his family and his humanity. The labyrinthine intrigues enhance a building atmosphere of paranoia in this dark and emotionally-charged classic espionage thriller.

by Guy Gavriel Kay, Roc (9780451463302)
Haunted by the ghosts of fallen warriors, Shen Tai is forced into the political machinations of the Emperor’s court when he receives a rare and valuable gift. Lyrical language and complex characterization draw readers into this elaborately unfolding epic set in a fantasy world that richly re-imagines 8th century Tang Dynasty China.

Black Ships by Jo Graham
Genghis: Birth of an Empire by Conn Iggulden
The Moon and the Sun by Vonda N. McIntyre

by Julie Orringer, Alfred A. Knopf (9781400041169)
In this sweeping yet intimate portrait of a Hungarian Jewish family in Europe, two lovers become enmeshed in the turmoil of the Holocaust. With gorgeous prose and an exquisite evocation of Paris and Budapest, Orringer writes movingly of their strength and the bittersweet power of hope and love.

by Stephen M. Irwin, Doubleday (9780385533430)
Guilt ridden Nicholas Close retreats to his family home in Australia after the tragic death of his wife, only to encounter an ancient malevolence lurking in the nearby woods. Childhood nightmares and fairytale motifs combine in this emotionally powerful tale of implacable evil. Arachnophobes beware!

It by Stephen King
Faerie Tale: A Novel of Terror and Fantasy by Raymond Feist
Dark Hollow by Brian Keene

by Louise Penny, Minotaur (9780312377045)
Troubled by past mistakes, Chief Inspector Gamache, in his sixth outing, retreats to snowy and insular Quebec City where he becomes embroiled in intertwining investigations both old and new. Penny expertly delivers a layered story that is haunting, moody, and exquisitely drawn.

*A Matter of Class

by Mary Balogh, Vanguard Press (9781593155544)
A lady is ruined. A merchant’s son is trapped. Class differences loom large in this charming and playful take on the arranged marriage. Balogh’s Regency gem, where nothing is quite as it seems, is filled with affection and wit.

by Ian McDonald, Pyr (9781616142049)
A terrorist bomb sets off a chain of events that, over the next five days, entangles the lives of six characters. McDonald brilliantly imagines a world in which the ultramodern exists side-by-side with the ancient, and he blends science and mysticism to embody the contradiction that is Istanbul in 2027.

A Librarian
I am a single librarian with three cats and a steady rotation of foster kittens ...who sometimes even gets a chance to travel. I sound like the stereotype, don't I? :)

Blogs that Fascinate Me

Goodreads Books or, what I am reading